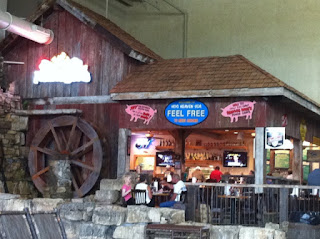 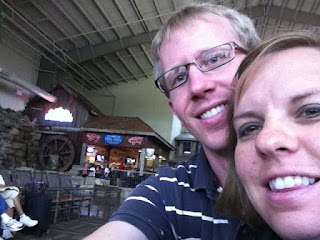 Apparently there's a Wendy's commercial (from the early 80s) that poses that question. If you know anything about Lynette's childhood, you know she doesn't know anything about television shows or commercials from that period. However, Matt has this keen ability to remember all commercials and their jingles, and is super disappointed whenever he tries to WOW Lynette with his random knowledge, and she remains a) clueless and b)rather unimpressed. Although sometimes Matt makes references that are HILARIOUS, and Lynette doesn't know that it's not a Matt original.

Today we are asking the question, "where's the beef", because we are sitting at the Branson Missouri airport, and literally the only restaurant option in the airport is Famous Dave's. And neither of us have ever been! Lynette has seen Famous Dave speak, live, in person, but never eaten there. In honor of our brother-in-law, David Slabaugh, and our lack of options, we'll be eating dinner there before we board our plane for Atlanta!

And another thing about the Branson airport.
- Make sure you get there three hours early...it's that busy. Or I'm lying. Similar to the lack of eating establishments, are the lack of airlines. The only airlines that fly to Branson are AirTran and Frontier.

So, the Branson airport in numbers:
3 gates.
2 airlines (unless you count "Branson Air Express" as an airline. I don't.)
1 fine eating establishment.
This leg of our journey: Priceless! (thanks to our airtran vouchers!)
Posted by Lynette at 4:39 PM